Although many people arrived in the Land of Shum as refugees from activism and ready to sit down on a rock and think for several years, the need for activism soon engulfed them, ready or not. From environmental issues such as preservation of ancient forests, advocating for alternative forms of energy and reviving and preserving rivers to civil rights and peace issues, many of the new residents organized quickly and continued their quest for social change. 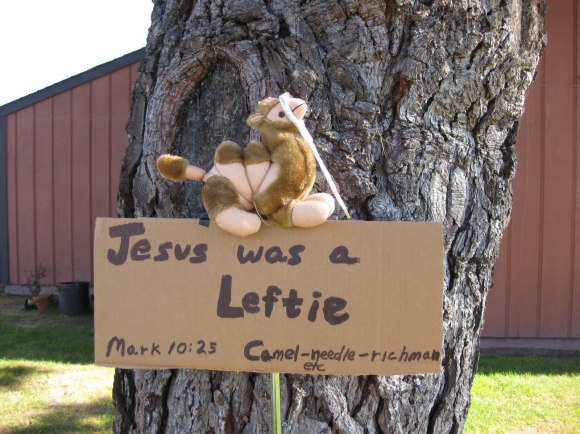 My “occupy sign”. Full quote is “It is easier for a camel to pass through the eye of a needle than it is for a rich man to enter the Kingdom of Heaven.” I’ve been waiting all my life for the right place to carry that sign.

The late Judi Bari, a well-known environmental activist who was severely injured when the car she was riding in was bombed in a case as yet unsolved, gets busted at a demonstration to preserve Headwaters Forest, one of the last stands of virgin redwoods in CA, from the logging industry. 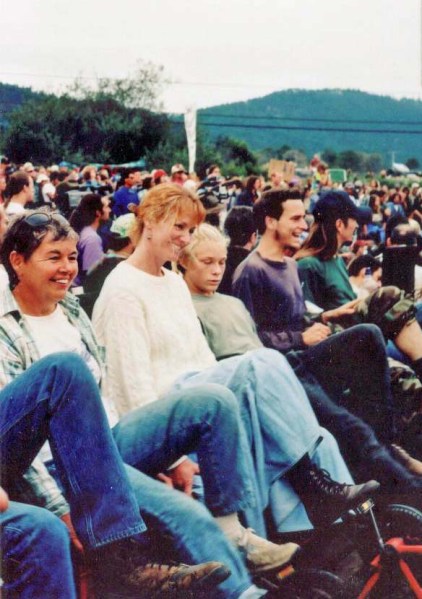 Demonstrators peddle to generate electricity for the stage at the big Headwaters Forest demonstration. 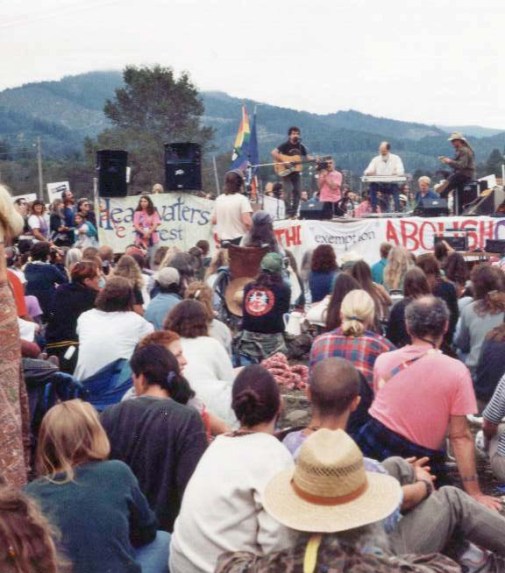 Stage at the Headwaters Demonstration. I think it might be Daryl Cherney onstage. 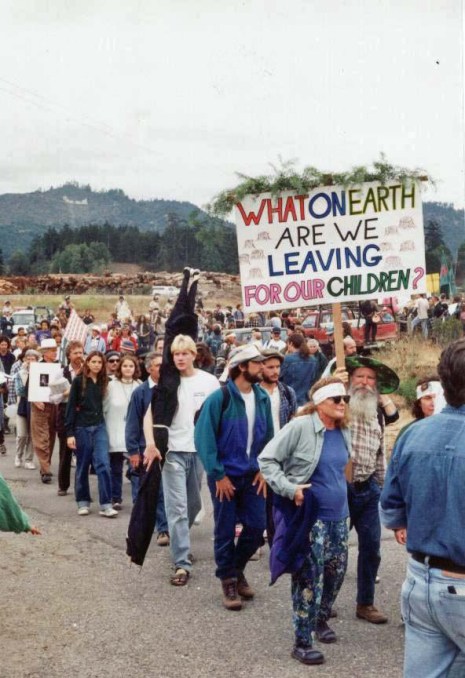 A Humboldt County Sheriff discusses the weather with a demonstrator waiting to be arrested. 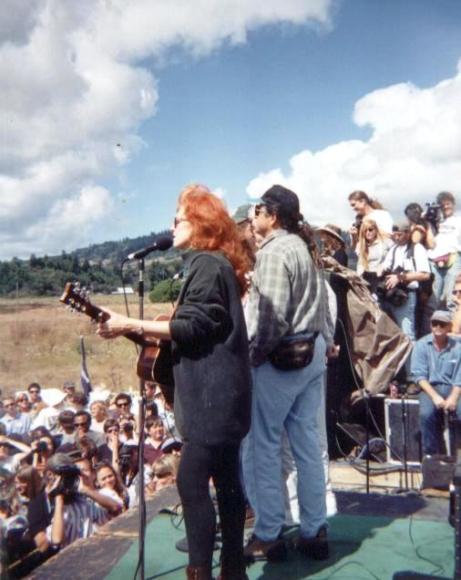 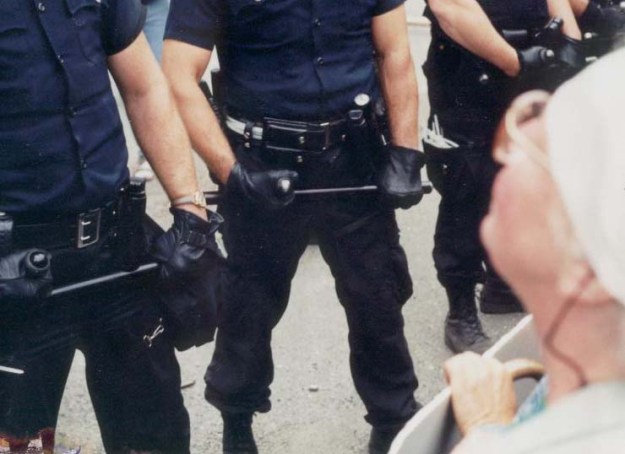 Waiting to be arrested at Headwaters demo. 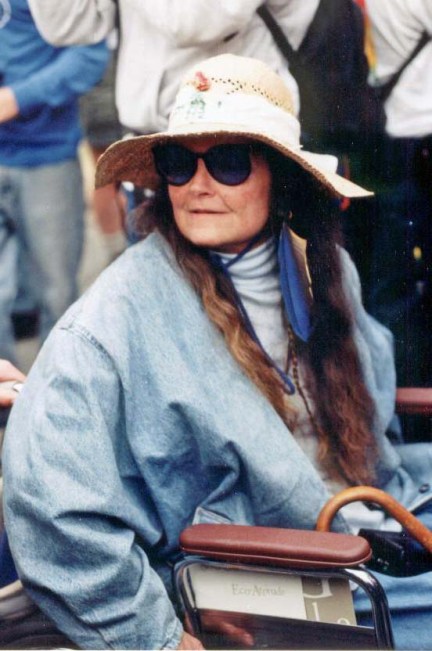 A participant in the Headwaters demonstration monitors events. 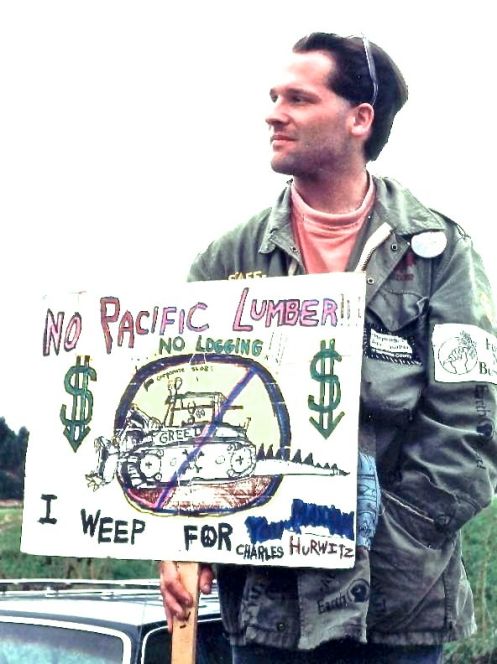 A participant at the Headwaters demo carries an intricate sign. I always thought if I had to choose the “mole”  or one of the “moles” at the demo that day from the photos I took, this would be the guy. 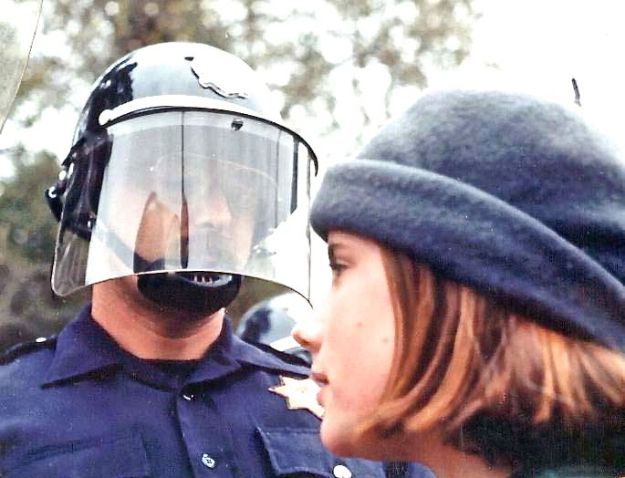 A young woman waits to be busted at the Headwaters demo under the bemused gaze of I know not which police department. 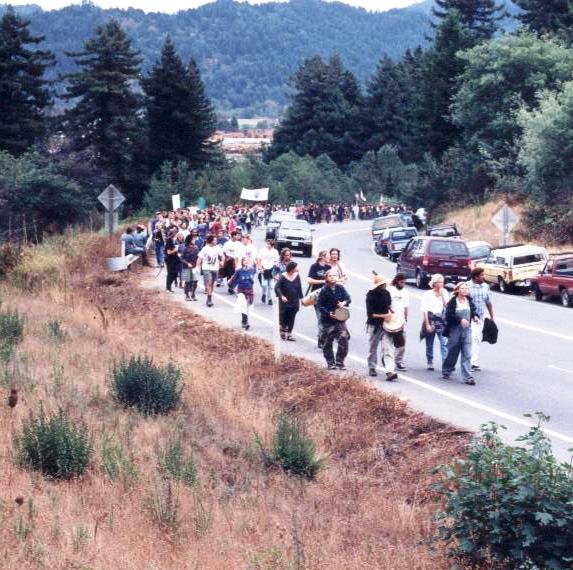 The march stretches as far as the eye can see along a highway near Fortuna, at the Headwaters demo.

The counter-demonstration by sympathizers of the logging company at the Headwaters demo.

Demonstrators walk in the direction of loggers, seen in the background. 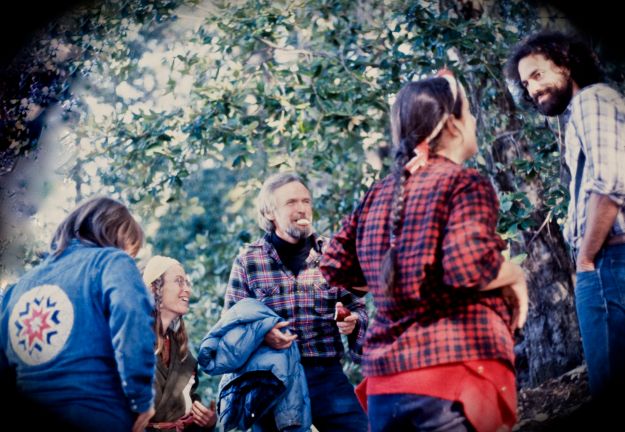 Environmentalist Rondel Snodgrass and other demonstrators share a moment.

Demonstrators, including children, stand on a downed redwood log. Whether this one fell or was logged is not known but it appears to have been down for a while and was probably not part of the round of logging being protested here. 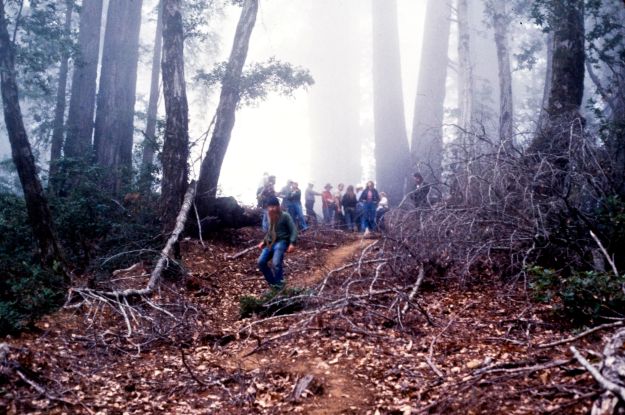 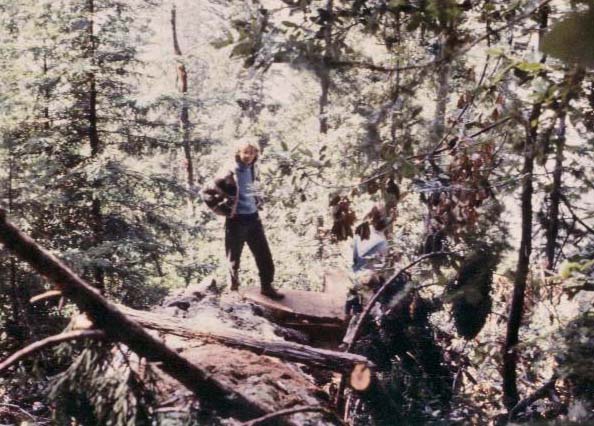 One of the objections to logging is that most of it is done irresponsibly. Environmental laws and methods are routinely ignored and/or manipulated. Above a landslide near Redway that may or may not be in some degree attributable to clear cut logging–sources disagree. It is certain that cpoor logging practices cause landslides and when this occur, they look a lot like this. This one blocked freeway access and egress north of the town of Redway for a year.

Friends of the Eel River

The Potter Valley Dam on the middle fork of the Eel River has been the focus of environmentalists for removing up to 90% of the water from the river, thereby ruining miles and miles of habitat, and sending it through a tunnel into the Russian River. That river flows in the opposite direction and ends up in Sonoma County, to be used for wine and development. The Garberville o

Whatever the environmental cause, in the Land of Shum, once, you lived it everyday. Pooling resources to buy food cheaply in bulk was one way that happened. The more cheaply you can live, the less your living impacts on the environment. 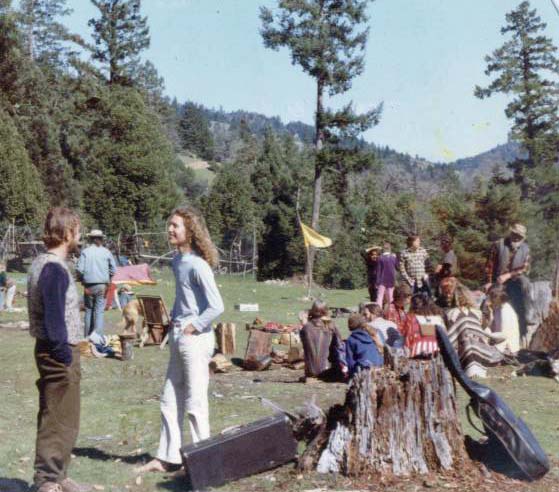 At a spiritual retreat, rotting stumps illustrate the Land of Shum’s logging history. 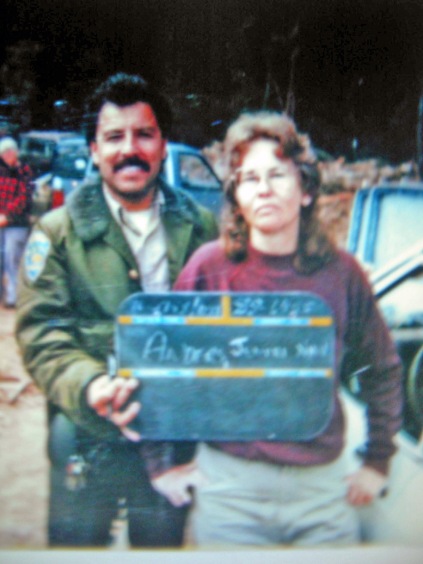 This is my field mug shot, taken when I was arrested in Whitethorn for treehugging. I’m not terribly happy, having just been run down a steep hill on my Lyme-disease-sprain-prone ankles with my hands handcuffed behind my back, through poison oak and whitethorn bushes, while the gentleman with the sign was congratulated for the bust by the last officer who busted me. That one had gotten sued for false arrest, along with the governor and sheriff, and had lost. I split the resulting financial award with the attorney, Ron Sinoway, and the other COGer with me when we were busted. After this shot was taken, I was placed in a police van along with others of “the Whitethorn 9”. One young man was bent over with the pain that had been inflicted on him. The officer CLMP (Civil Liberties Monitoring Project) had sued came over at one point, leaned into the open side door of the van, glowered at me and said “sue me for a million bucks, willya” as if he were about to hurt me. He didn’t, but I found the remark, in those circumstances, quite threatening. 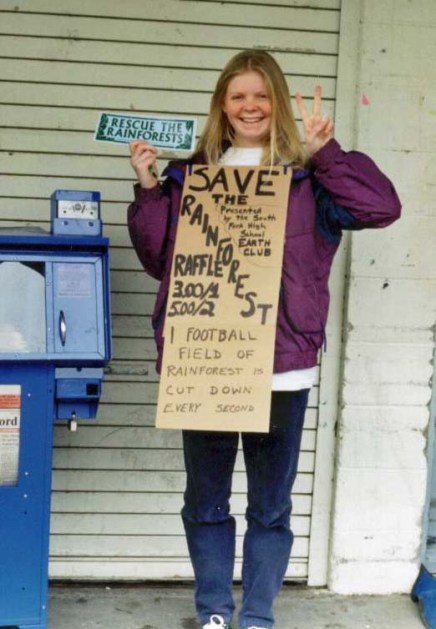 A representative of the local mainstream high school’s Earth Club holds a sign urging the preservation of rainforests, illustrating that the environmental activism of Shummers is not just about Shum. Yes, I know that the forests of Shum are temperate rainforests, but she was thinking tropical rainforests. She told me so. I don’t know if this particular teen identified with the back-to-the-landers of Shum, but I do strongly suspect that without the back-to-the-land influence in the local high school, there would be no organization called the Earth Club.

Treehuggers chain themselves to a gate leading into a grove slated for logging.

Pipe is placed over the chains to slow down extrication for arrest. 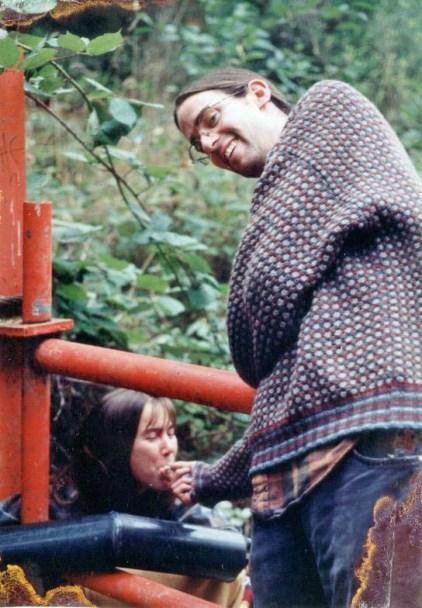 An unchained logging protester assists a chained one at a protest near Fortuna. Note the water damage to this photo in three corners of the shot, indicating the problems I faced in preserving these archives. High precip, leaky houses and trailers, water damage is still another downside of life in the Land of Shum.

I, along with many members of the public, speak to Atomic Energy Commission representatives about what to do with nuclear waste at the decommissioned PG&E Nuclear Plant in Eureka. The ancient plant, the oldest, or one of the oldest in the country, is located just south of Eureka, upwind, we used to say, from SoHum. The stored waste is known to have leaked radiation into Humboldt Bay and it just so happens that I ate clam stew made from clams obtained from near the leak on a day it was known to have been leaking, so I felt a personal relationship to this particular nuke. Something needed and probably still needs to be done about the waste, but the proposal was to transport it and many of us felt that was too risky.

Documentation, stories and comments about the history of "back-to-the-landers" in southern Humboldt County by a longtime resident and anthropologist who lived it. Background material to the book Beyond Counterculture: the community of Mateel.
%d bloggers like this: